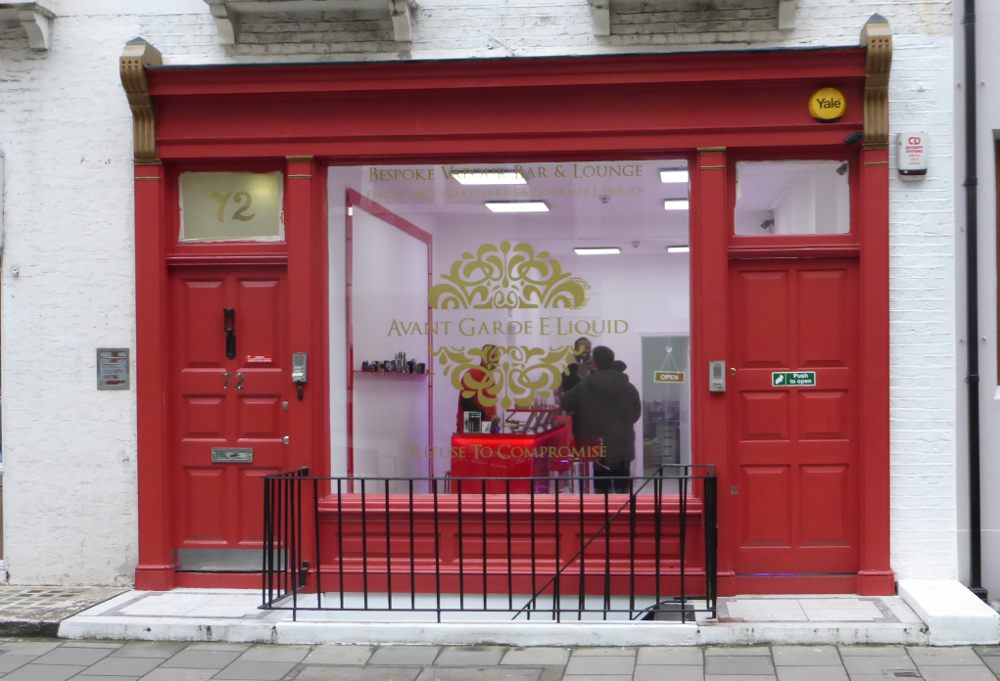 Smoking rates in the UK have halved since the 1970s but now more than 2 million people are inhaling in a different way. A vape bar and lounge has opened in Fitzrovia selling “E liquids” for use with electronic cigarettes and offers customers to taste the products before buying. The owner claims that E cigarettes have no proven health issues and are the best alternative to smoking and a proven aid for people wishing to stop smoking.

The E liquids come in a variety of bottled flavours. These are poured into a device known as a clearomisor, fitted with a battery to heat the mixture to create a vapour and enable people to inhale the flavour.

This is known as vaping and is on its way to becoming a cultural phenomenon as well as a difficult public health issue. The word “vape” was named Word of the Year 2014 by Oxford Dictionaries, so significant is the practice.

Electronic cigarettes contain nicotine, an extremely addictive substance which is poisonous and is derived from tobacco plants. With conventional tobacco sales in decline in established markets, and electronic cigarette sales booming, the tobacco industry has launched its own products as well as taking over existing manufacturers. But the vape industry remains relatively unregulated.

Fitzrovia News visited the vape bar at the invitation of the owner and their marketing people.

“You can come in and taste the flavours at the cocktail style bar and mix and blend them to suit you,” says the owner who opened the shop in the City of Westminster part of Fitzrovia in November. “It is an alternative to the harmful effects of tobacco but you can have them made of tobacco flavour if you like. Others are fruits, vanilla custard, the list is endless.”

The bar does not sell coffee and other drinks, but customers are allowed to bring their own — or have a coffee flavoured vape.

Although the owner of the Fitzrovia shop claims to be London’s first vape bar a similar operation opened in Shoreditch High Street earlier this year.

What makes the Fitzrovia shop different says the owner is that unlike other places his store offers a bespoke service where a blend of three ingredients — nicotine, the base liquid, and the flavouring — can be prepared on the premises to the customer’s preferred taste. The amount of nicotine offered can be from zero to one of three varying levels.

We are told about the type of “throat hit” that users are looking for when inhaling the product. By varying the amount of Propylene Glycol (PG) and Vegetable Glycerine (VG) in the base liquid the vaping sensation can be varied. PG produces a stronger “throat hit” than VG.

The company uses pharmaceutical grade nicotine and quality products and creates the base liquids at its own factory. However, while the individual ingredients are regulated by law the processing to create the e liquid is not. Instead the company has its product tested independently to verify its contents and complies with guidelines laid down by the electronic cigarette trade association. When asked about licensing and regulation, the owner said he would welcome it, but not if the law meant customers could not vape in his shop.

Despite the claims made by their marketing people, and repeated by the owner, that there is “no proven health issue” and the product is “a proven aid for people wishing to stop smoking”, medical opinion is divided on this. The World Health Organisation (WHO) has called for vaping to be banned indoors in public places and a major scientific review criticised the claims made for electronic cigarettes being a proven aid to reducing smoking.

At New Broadcasting House the BBC has banned the use of electronic cigarettes and TfL has banned them from its entire network. In pubs and clubs vaping is permitted but property managers and pub landlords are legally entitled to ban it.

We asked various premises managers in Fitzrovia if they allowed people to vape indoors and got a variety of different answers. Some said they would definitely not allow vaping while others said they would only introduce a ban if there was a complaint or to prevent people vaping in front of children. But many people recognised that e-cigarettes may have a role in helping people to quit smoking.

In November the first TV advertising campaign showing someone vaping was shown after advertising rules were changed. But the British Medical Association (BMA) has asked for the new advert to be taken down because it glamourises vaping and could indirectly promote tobacco smoking.

Westminster City Council is responsible for both trading standards and public health in the City of Westminster. A spokesperson said that the council is “committed to helping people to live healthier lives and has committed time and resources to the ‘Kick It’ initiative which aims to help people give up smoking. However, our Trading Standards team would only look to intervene – it can only intervene – where there is a breach of existing legislation.”

New legislation is on its way to regulate the sale and use of electronic cigarettes and other vaping products but until then a voluntary policy of control is being used by some vendors. The new vape bar in Fitzrovia restricts the sampling and sale of its products to those over 18 years-of-age and its website does warn people about the dangers of nicotine inhalation. But there was nothing clearly visible to warn customers in the shop.

Fitzrovia News has no reason to believe the owner of the shop is breaking any existing laws. We declined the invitation to try any of the products.

One Reply to “Vape bar offers alternative to smoking, but where is the regulation?”