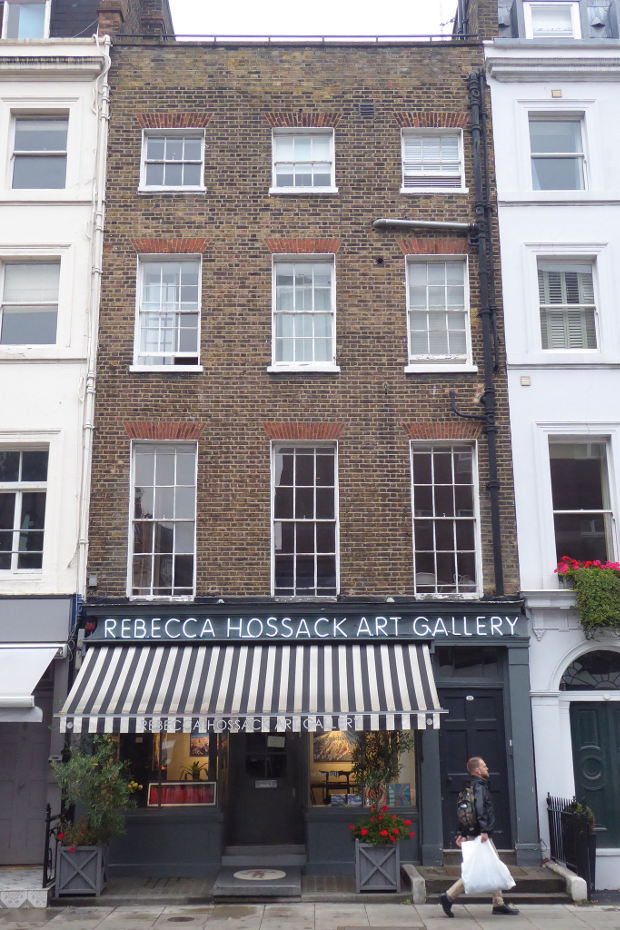 A building containing the former family home of artist and designer couple Adrian and Corinne Heath and the studio of modernist artist Birgit Skiöld has been listed as a heritage asset because of its architectural and cultural value.

Historic England has given Grade II listed status to the building at 28 Charlotte Street because it holds architectural interest as “an externally little-altered example of an eighteenth century terraced town house with an inserted nineteenth century shopfront” and for the “legibility of its floor plan, and surviving range of interior joinery and features”.

The designation also recognised its historical interest because of its “association with the artists Adrian Heath and Birgit Skiöld” both of whom worked out of the building in the second half of the twentieth century.

Historic England also regarded the building as complementing the neighbouring property at 26 Charlotte Street which is listed at Grade II.

Adrian Heath (1920-1992) was a major figure in the development of abstract art in England during the forties and a key proponent of Constructivism. Corinne Heath (died 2009) was a theatre designer.

The protected asset status means any redevelopment plans have to receive listed building consent. A planning application for its redevelopment which was approved by Camden Council in April has now been withdrawn.

The application to list the building which was built in 1766 was made by the Bloomsbury Area Conservation Advisory Committee and prompted by Camden’s decision to allow the building to be converted into flats.

Having made their visit to the building in June, Historic England inspectors then produced an initial report and asked for comments and further information.

According to the case report seen by Fitzrovia News there were two detailed responses.

On behalf of the owner, the Heritage Collective argued that the building does not merit being listed because its exterior had been altered and there are insufficient interior features of note. They also claimed there was little interest conferred by the association with the artist Adrian Heath. They concluded that the building does not compare favourably with other listed examples of this typology, and does not meet the criteria for listing.

However, local campaign group the Charlotte Street Association successfully presented a case for the property’s architectural merits and cultural value. They argued that the building has one of the finest remaining Georgian facades in Charlotte Street and that it is possibly the only remaining house to remain un-subdivided (excepting that the ground floor and basement are in commercial use).

Their response also noted interest for the 1960s studio to the rear of the house, designed by architect Charlotte Baden-Powell, which re-uses the boundary wall of the rear yard, and leaves in place the remains of the chimney stack of the previous two-storey outbuilding. They noted that the studio is double-height and uses a clever section to bring light into the space.

Evidence showed that from the mid-1950s and 1960s the house became a meeting place and a centre for an important and unique group of British abstract and constructivist painters in the post-war period.

These figures included Victor Pasmore, Terry Frost, Peter Lanyon, and Patrick Heron. Adrian Heath’s presence was a continuation of the tradition of artists, their studios and their teaching, based in Charlotte Street and Fitzrovia since the late eighteenth century.

From the late 1950s to the early 1980s, Birgit Skilöd ran the first open-access professional print studio workshop in England from the basement of the building. Her facilities were used by artists including David Hockney and Eduardo Paolozzi.

Having assessed the arguments for and against listing, the advice report by Historic England concluded that the building was worthy of protection.

“28 Charlotte Street is an important survival of an C18 town house modified for commercial use in the C19 and then for the occupation of artists of some repute in the C20. We acknowledge that there have been some alterations — this is to be expected in a house of this date — but the degree of original fabric and later alterations which add to its character and interest is such that we have no hesitation in recommending its Grade II listing.”

Listed status was given in September 2017.