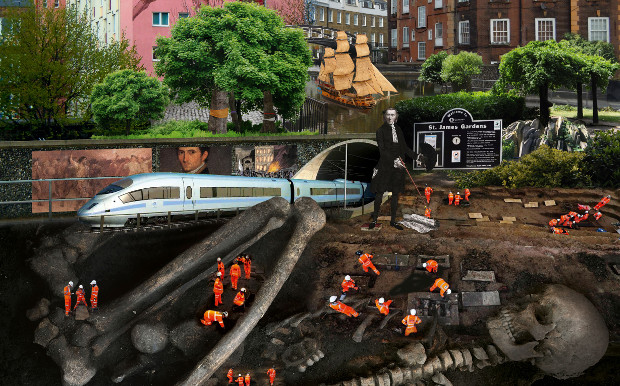 A new docudrama opens on the stage this week about the highly controversial £80bn (and rising) construction project to build a high speed railway line from London to Birmingham.

Human Jam will be performed at the Camden People’s Theatre, a few hundred metres from where 63,000 bodies have been dug from graves, a hundred mature trees have been chainsawed, and where people are losing their homes, parks, pubs and businesses.

All is being cast aside to make way for HS2’s new railway terminal at Euston to be designed by Fitzrovia firm Arup who along with other mega corporations will do very nicely from the multi-million pound contracts.

In this 70 minute play Brian Logan and Shamira Turner tell the story of the little people who are being displaced and of the ghosts of Euston past.

“People know the line threatens sites of natural beauty in the Chilterns,” say Logan. “Not as many know that 80% of the demolition required is taking place in the London Borough of Camden. Hotels, pubs and schools have been closed, while well-loved Drummond Street — the ‘home of British curry’ — gets its end lopped off by the new Euston station,” he says.

“Human Jam is an ambitious grassroots docu-theatre investigating the impact of HS2 railway plans on the local living and the local dead,” says Turner. “It’ll feature haunting music, sleuthing and detective work, stories of the dead being dug up from St James’ Gardens, with testimonials and protest songs from our Camden community chorus,” she says.